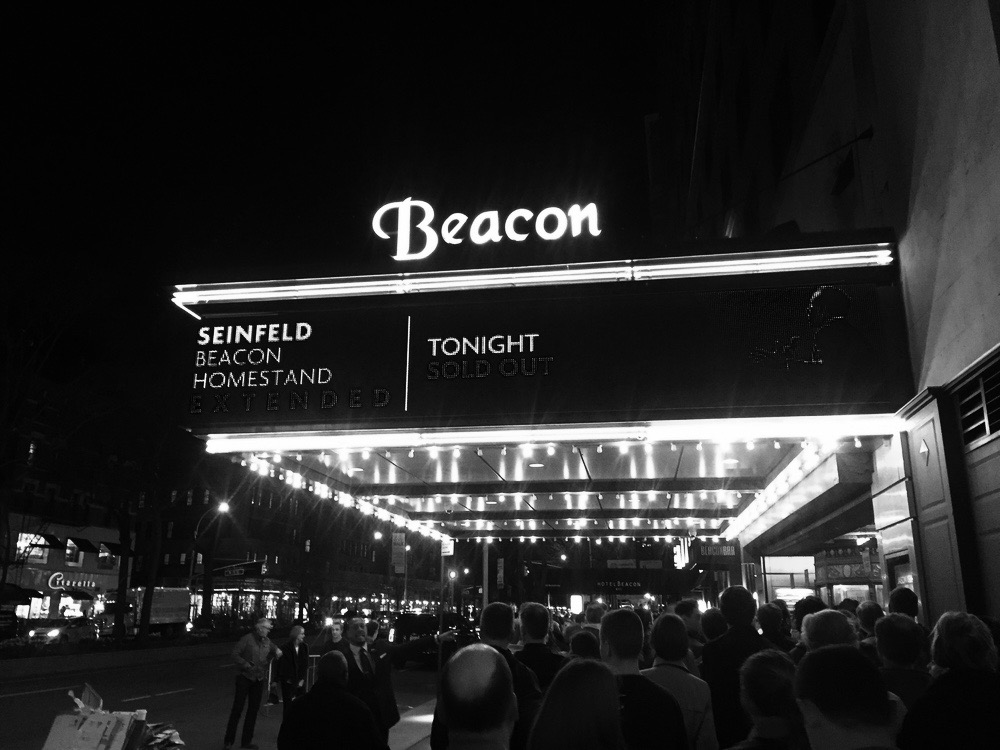 The History of the Beacon Theatre

The Hotel Beacon and the Beacon Theatre were built in tandem as an eight-million dollar venture in the late 1920s. Adorned with a fully-functioning overhead airway beacon during the early days of flight, both the hotel and theatre were met with immediate acclaim during their inauguration and continue to thrive today.

The Hotel Beacon maintains its status as the jewel of the Upper West Side;  the Beacon Theatre has grown to see the likes of famous musical acts, the teachings of the Dalai Lama, and has played host to frequent Tony Awards ceremonies.

The Beacon Theatre continues to be a hub of activity in the Upper West Side, bringing in folk legends, contemporary music, and special film screenings. Here’s a look at the theatre’s history and highlights over the years.

The Beacon Theatre was designed by 20th-century American architect Walter W. Ahlschlager, who also designed the legendary Roxy Theatre that stood near Times Square. The Beacon was created as a silent film show palace, but delays in the theatre’s opening occurred while the industry was outgrowing silent films. The Beacon opened with an early sound adventure film, Tiger Rose, in 1929.

It continued as a movie house through the 1970s, when it was turned into a live music venue for pop concerts. Its special acoustics, originally created for live music accompaniment to silent films, were the perfect draw to big-name musical guests, such as The Rolling Stones and The Grateful Dead.

Today, the theatre’s Roaring Twenties grandeur has been restored to appear much as it did when it first opened.

The most frequent performers at the Beacon Theatre were The Allman Brothers Band, playing over 230 shows at the venue before bidding farewell to longtime fans in their final concert in 2014.

Duran Duran recorded a live album at the Beacon in 1987. The venue also played host to the 10th anniversary special of Late Night with Conan O’Brien, and was the site of the late George Carlin’s HBO comedy specials.

Aside from premier film screenings and live tapings, in recent years the Beacon Theatre has played frequent host to Broadway’s most honored event, The Tony Awards, including its 70th anniversary special. While the Beacon is less than half the size of Radio Music Hall, its intimate setting, excellent facilities, and flawless acoustics have made it one of the nation’s enduring theatres.

As we mentioned, acoustics at the Beacon Theatre were originally designed for live musical accompaniment to silent movies and vaudeville acts. This seemingly vintage notion has served the theatre well, as its acoustics for live music shows are superlative among theatres.

The Beacon is noted for its design and architecture, designated as a city landmark building by the NYC Landmarks Preservation Committee in 1979. It has also won awards for its excellent renovation work.

The theatre lobby’s white, marble floors are punctuated by original bronze doors. Hand-painted murals elevate and lighten the atmosphere of brass fittings and deep hues of red. The most recognizable aspect is the theatre’s proscenium arch is guarded by two, 30-foot tall Greek goddess statues.

While booking your stay at Hotel Beacon, make sure to check out upcoming performances at the Beacon Theatre next door. Chances are you’ll find a contemporary music show to enjoy in the atmosphere of the Roaring Twenties. See event calendar.

Perfect for families or a comfortable stay in New York City, Hotel Beacon will make you feel at home. Rooms are equipped with kitchenettes and on-site laundry is available. See special offers and learn more.